Besides its students, Wabash College relies on a vast array of influential people in progressing the overall well-being of the college. More so, many of these contributors happen to be some of the most helpful and professional women on campus. This week, The Bachelor takes a more in-depth look at five women that play crucial roles in making the College one of the best liberal arts schools in the country in part one of two of the ‘Wabash Women’ mini-series.

Weir is originally from Muncie, Indiana. At a very young age, she moved with her parents, both being doctors, to Seymour, Indiana. She obtained her undergraduate degree from Wittenberg University with a B.A. in English. Upon graduation, she spent three full years in Japan teaching in the Jet Program,  a college exchange program in which American students teach English to Japanese youth. While abroad, she learned many aspects of the Japanese educational environment. For example, it is mandatory for students to wear uniforms with little to no differentiation. For Weir, this represents the collective culture that Japan is known to foster in its society. After her three years in Japan, Weir attended Harvard Divinity School where she studied comparative world religions, specifically African syncretized faiths. After Harvard, she took an assortment of jobs, including a professor role at IUPUI. Now that she is at Wabash, she works with international students on their integration into College and American life in general. For Weir, this is a gratifying profession because she can relate to international students with her background in world religions and culture. She lives with her boyfriend, Michael, and enjoys playing tennis in her spare time. 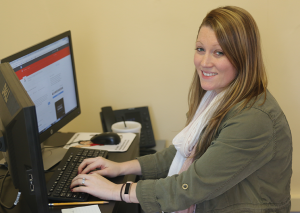 Cassie was born and raised in Montgomery County. She grew up just miles south of Crawfordsville and attended Southmont High School. Upon graduation, Hagan went on to Ball State University where she obtained a Bachelor of Fine Arts in degree studying photography. Hagan did not want to be a photographer, so she took on some jobs that helped form her current passion: customer service. For Hagan, however, Wabash students are her customers. On a daily basis, she works in career services giving advice and support to Wabash men on careers and post-college work. “You guys can just walk in and receive career advice,” she said. “This means my days can look different from how I thought they were going to be. However, it’s worth it to sacrifice our day to offer you guys that service.” Hagan’s strong desire to enhance the live of Wabash students make her a vital aspect to the community. Outside of her profession, she enjoys spending time with her family, especially her 5-month-old daughter, Scarlett. During Hagan’s free time, she loves lifestyle photography.

Albrecht was born just outside of Detroit but moved to Crawfordsville when her father accepted a physics professor job here at the College. Ever since her childhood, she remembers spending endless amounts of time in the Lilly Library since her mother was the librarian. It was during these experiences where she first fostered a love for Wabash College. Albrecht attended Crawfordsville High School, and then went on to Earlham College to gain a degree in physiology. For her graduate studies, she went on to IU to receive a master’s degree in counseling. Before Wabash, Susan taught high school social studies at Martinsville High School. She also spent a short time working in the commercial loan department at Chase Bank. Nonetheless, she had to take the Wabash library position as soon as it open, for her old childhood memories brought a reminiscent affect. She has been here now for 22 years helping Wabash men follow their dreams. Currently, she helps students apply for nationally competitive fellowship programs including the Fulbright and Rhodes programs. “I try to support students in what they are doing,” she said. “That may be answering questions, reviewing essays, and helping them decide who to ask for recommendations.” This dedication in her professional life illuminates how she thoroughly cares about the men of Wabash College and wants to see them progress even after their undergraduate studies. At home, Albrecht spends time with her family. She has one son, Jackson, a freshman at Wabash and a daughter finishing up her education at Princeton University. In her spare time, the enjoys attending Wabash sporting events and kicking back to some Netflix.

Douglas is from Logansport, Indiana. She received her undergraduate degree at the University of Indianapolis with majors in Spanish and history. After graduation, Jamie met her husband, Prof. Scott Douglas, who works at the College’s Health Center. They have two kids, Abigail and Cameron. After starting a family, Douglas moved down to Texas to support her husband as he served in the Air Force as a surgeon. This is an essential part of her time as a mother because she was able to spend three years at home with her children. Once returning to Indiana, however, Jamie decided to head back to school and continue her education at Indiana Wesleyan. She studied marriage and family therapy, as well as addictions. She started a private practice here in Crawfordsville, and eventually took up a part-time job here at Wabash as a counselor. Douglas thoroughly enjoys working at the College and finds it extremely rewarding. In her spare time, she loves to sail on Eagle Creek, where she and her husband race J-24 boats. She also enjoys reading, gardening, and sewing.

Lamb, or has most students know her, Nurse Lamb, was born in New Market, Indiana just south of Crawfordsville. After her graduation, she went on to nursing school at St. Elizabeth’s in Lafayette. While at college, she focused on clinical studies, an experience-based program that gives soon-to-be nurses hands-on experience. After nursing school, Carol went on to work at the Culver Union Hospital here in Crawfordsville, which no longer exists. She then worked as an office nurse for 20 years and then took up the nurse position here at Wabash. Lamb’s warm affection for this school shows through her personable characteristics and certain sense of humor. “You young men breathe life into the community,” she said. “And you’re healthy for the most part.” Outside of her role as the school nurse, Carol enjoys spending time with her adopted granddaughter from Vietnam. In her spare time, she loves to play and improve on her golf game.